My cat loves it, huge game change for me! So much better!

This was a Christmas gift. Have not ssn it in action yet

I love it!! It gives the cats privacy as well as keeping it closed.

Hello! I love my liter box but desolately need a new liner? When will they be available? 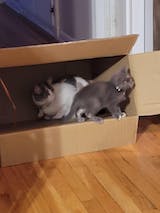 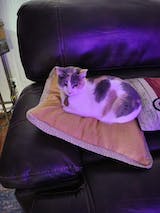 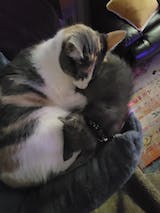 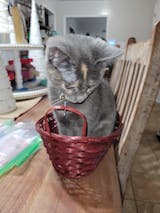 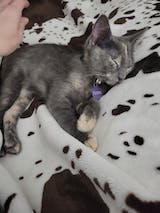 This product is so worth the money. It’s easier clean up, quiet and efficient. However, it is a little messy because of the litter splashing out as the device turns to clean. But they do have an attachment curtain that I would recommend purchasing with the product. Also, adding in the litter is a little tougher than I imagined and you do have to make sure you press the button quickly two times so it knows you’re adding litter (otherwise the weight sensor can be inaccurate). But those are seriously just minor things. Both my kitty and I love this product!! She hated the pellet litter bc it didn’t mask the smell (despite it saying it would, lol) and she peed outside the litter box all the time. But this product fixed that problem up instantly! Definitely worth it!

I do a lot for my cats, and now I did this for myself. I had a friend suggest this - the wifi version, then gently prod me into getting it. I love this so much! I wish I would have known this years ago. It has made my life so much easier, and my cat's love it! Didn't take them long to get used to it - even the very skittish one. Money very well spent!

This litter box is so quiet and works great.

After my kitten got past playing in it and I got it running properly I love it. I think Lil Red does too. Easy to empty. I am sure it will not be as easy to deep clean but you take your losses with your wins

I remodeled my kitchen and did not want the mess and smell of a litter box. I purchased the Petee Cat Litter Box along w/accessories including the Curtain. The curtain is durable, attractive and attaches to the Litter Box opening easily & securely. A good enhancement to the base product.

So far the movement is quiet and litter moves easily through the system. I have notice more in clumped litter in the storage bag which was unexpected. I have three cats and the only one not freaked out by the turning is the kitten. Have had to keep a second box for the other two cats. At least until I can get them to be okay with the new box. It is a work in progress. Hoping they all get more used to this soon

I’ve had the litter box for about two weeks and it works well. My cat took to it right away. Very quiet

Works good. Still fills w/one cat but can be assured not to overflow between cleanings.

I have wanted an automatic litter box for the longest time but wanted to make sure I invested in the right one. This brand & model is perfect. So easy to set up & change. What sold me was being able to buy replacement parts like the inner liner & a larger disposable area. My cat’s transitioned with no problem & they are very picky cats! Also shipping was so fast!

Made my life so much easier!! No smell
I love it

Super quiet. Makes my life so much easier. My overweight cat fits inside with no problems.

I had a Robot Automated Cat Litter Box before and after about 4 years of great use, it just quit working. I decided to try The Petree because of the lesser cost and high reviews. So far it works great. The container for the discarded litter is smaller than the drawer on the Robot, bit I just have to change it more often. It was a good buy.

Works like a charm. It does discard clean litter though.

This was the most reasonably priced automatic litter box and it works amazing. Since day one have not had one issue, very easy to use, I like that it notifies you on your phone once the box is full.

so far so good my smaller cats like it. Bigger cats don't. but still ok..

If you have multiple cats; get the XL bin....you'll need it!

I was so done cleaning out litter boxes. I'm the only one in the household who will and it was getting old. I decided to bite the bullet and invest in an automated litter box. I spent a lot of time researching and comparing various models before I decided to go with Petree (w/wifi). I have two cats. One who fears nothing and the other who is skeptical of everything! We recently had an issue with our local pet store unable to stock their clumping litter that's refillable due to supply chain problems. I had to choose an alternative which was the ground corn husks. Not the nicest smelling stuff but it would have to do in a pinch. Well, I think with the combination of the new plastic smell of the Petree unit, their odd smelling litter and a rather messy first attempt at use....my pickier feline turned her nose up and walked away! Lovely! After four days of trying to encourage her but not scare her, I broke down and took the entire thing apart, gave it a thorough cleaning to establish new smells. By the way, taking this unit apart and re-assembling it is a complete breeze; don't be intimated by its size! At last, my pet supplier was in full supply of our favorite litter so quickly I set to re-assembling the Petree. I could barely keep them both out of it long enough to plug it back in! WOOHOO!!! Success at last! I personally feel they are even more excited about having a fresh clean box every time they step in! I can go about 3 days on the XL litter catch with these two so I'm completely happy about that! Easy process! I love the app. I agree it could use some extra features but again, I'm very please with what I've purchased and would highly recommend it! Matter of fact, a friend of mine is using me as the guinea pig before she commits to a unit herself! I hope this helps for anyone who is truly on the fence. Recommendation: perhaps try giving it a good wash before introduction if you have cats who are finicky about smells. Good luck!